The trip to Chiang Mai was a breeze.  A quick flight, then 15 minute ride to my hotel.  I decided to stay at a nice hotel before I headed to volunteering, so it felt great to be greeted and shown to my beautiful room. I immediately brought my clothes to be washed, got out some more money, got my bus ticket for volunteering, and got a spa massage.  It was such a relaxing day, and I was slowly falling in love with Chiang Mai. My hotel was a block away from the Night Bazaar, so that evening, I ventured out to see what it was all about.  I of course had to try out a fish pedicure, which felt really weird- the fish literally suck on your feet, in-between your toes, and work their way up your calves.  Sitting there for 40 minutes was torture, but how smooth my feet felt after was priceless.  I ate some amazing indian food washed down with a Chang beer, then finished my meal with mango sticky rice.  I have to say mango sticky rice is what I miss most food-wise from Thailand.  I then started walking down rows upon rows of vendors all selling some sort of goods. I found my way to an ammeter muay thai boxing match, and sat while they kicked and punched the crap out of each other.  Eventually one of the guys got knocked out. It was pretty intense fighting, and I was happy to see the guy that got knocked out up walking around asking for tips after.

The next morning, I woke up and it was raining out.  I was supposed to meet Nooh outside of my hotel at 7:40am for a bike tour.  I was wondering if the tour would still happen. I stood outside, and a man showed up on a motorcycle.  He asked if I was Katie, and said hop on- he had a pancho for me to throw on.  I got on the back of his bike, and we made our way to another hotel where we met two others.  By this time, the rain was dying down thankfully.  We walked over to his shop a few blocks down.  There we picked up bikes, and Nooh explained our day to us.  We would make our way around Chiang Mai, stop at local markets, food places, see art, and go to a waterfall.  All for 1100 baht (about $30 usd). His business model is to make his tour affordable to everyone, while giving back to the local community.  The money we spent not only covered the cost of an all day tour, a bike, but also a ton of food that we stopped to get throughout the day. It was awesome to see Chiang Mai through the eyes of someone who lives there, meet the local people, and get a sense of what it’s like to truly live there.  I had the best day, but really treasured the conversation I had with Nooh when we got to the waterfall. He started asking me where I had traveled, and where I was going to travel to next.  I told him about my volunteering and mentioned my journey in quitting my job.  He told me that he used to work for a mountain biking company, where he made really good money.  He saw a lot of cheating and stealing going on, and didn’t believe in how they were running their business, so he decided to quit. He took a month off to really think about what he wanted to do.  He thought of the idea of opening up a bike tour company.  He had a lot of obstacles in his way as he thought about how it would work.  He did not own a car to provide transportation for the tour, he had no schooling on business, and he didn’t have a ton of money to invest to start up the business. He did know that he wanted the business to come from his heart and to show others what he loves about Chiang Mai. The first year, he didn’t have a ton of business, but slowly, through word of mouth, the 4th year, business is starting to pick up.  A couple even sent him a cannon camera after their time with him to help him take pictures, and a friend helped him start up a website.  He mentioned he doesn’t make a ton of money from each tour, but he’s happy doing it.  He then started asking me more about volunteering and said it gets cold in the hill tribe country I was going to.  He ended up giving me several bags of clothes to bring for the children I was volunteering with.  He was such a great man with such a huge heart.  This day really taught me that if you put your mind to something, and your heart is in it, you can make anything work.  I feel like it was fate that I met Nooh that day, and will be forever grateful for my time with him.

The next day I headed to Chai Lai Orchid for an elephant excursion.  This company treats their elephants well (there are many companies in Thailand that mistreat elephants), and most of the proceeds from the elephant tours goes to educating women from Burma who would otherwise see no other option than to go into the sex trade.  This experience was like nothing I’ve experienced before.  The day started with a fresh coconut to hydrate, then I got to feed and pet a baby elephant and its mom.  I then went on a bareback elephant ride that was thrilling and terrifying at the same time.  We went up and down rocks, through the river, and if I got off balance, I would have fallen to the ground and cracked my head! I then got to go into the river and wash a baby elephant, which was so cute! I had a break for a beer and pad thai, then took a bamboo raft down the river.  It was an unforgettable experience, and I got to meet an awesome couple from Atlanta along the way! That night I went to the Sunday Market Walking street, which was 1km of local artisans displaying their goods.  Lots of good shopping there!

I then headed home for a good nights rest before I left in the morning for volunteering! 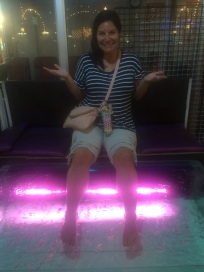 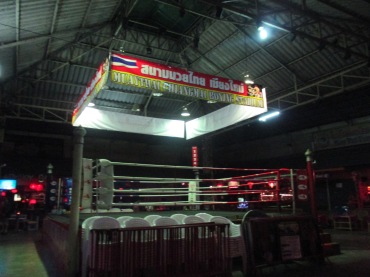 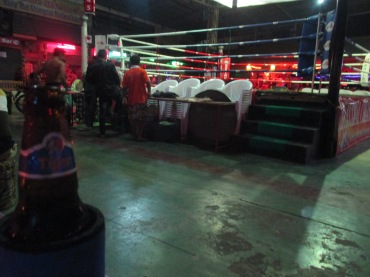 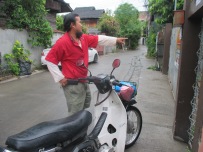 Meeting Nooh and finding out he is a big Chicago Blackhawks fan!

Murals outside the US Consulate.  The US flag was hung at half mast because of the San Bernardino shooting. Good thing for FB otherwise I would have wondered why.

Biking round to local markets

My first waterfall in Thailand

Nooh with all of the clothes to donate

Elephants! No captions needed here- you can see the joy on my face