I’m finally at a working computer and have the chance to write about my trip to Peru! This trip was life-changing in many ways.  It was the first trip I’ve been on where I didn’t have any email to check, so other than a few check-ins with my family, and a few facebook updates, I was able to really focus on being in the moment and truly taking the trip in.  Peru was also a magical place, and the people there are so hard working, considerate, and inspirational.  I’m going to start by giving you an overview of what we did on the trip, then I’ll do a few posts on what I learned.

My friend Erin and I traveled to South Africa exactly a year ago.  We were talking about our next adventure, and she really wanted to go to Peru and visit Machu Picchu because there are rumors they may close it to the public in the coming years.  Although I didn’t know a ton about it, and had never thought about going to South America, I agreed on the destination, and we started planning.  We always like to include a good mix of culture, adventure, and relaxation into every trip. We agreed we were going to plan it to take advantage of the extra day over Labor Day and go for 9 days. After researching airfare, we realized we wouldn’t have as much time there as we first thought because there are no direct flights anywhere- you have to fly through Lima to get to almost any destination. 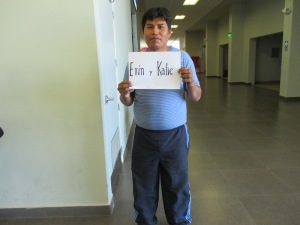 The best feeling when someone is waiting at the airport when you arrive!

Our first stop was at Lake Titicaca. It’s the highest elevation point in South America at 14,000 feet- good thing we took altitude meds before we left- you are typically supposed to work your way up to that elevation, but thankfully we were both fine.  We wanted to emerge ourselves in culture right away, so after getting picked up at the airport, and driving an hour, we were taken in a boat to a Uros Island to do a homestay with a family.  There are 87 different floating islands made out of reeds that families inhibit in this area.  They have schools and a president for their community, and spend a lot of time maintaining their island by refreshing the reeds, building boats out of reeds, making crafts, etc. They live such a simple life, and it was great being on their island for a full day/night to experience how they live.  More to come on this in future posts!

Our host picking us up from the shore to take us to his island.

The beautiful island we stayed on. 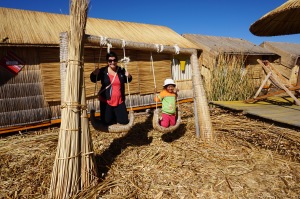 Playing with one of the little girls who lives on the island. 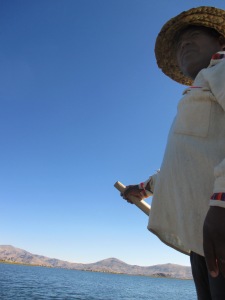 Out for a boat ride.

Showing us how they fish.

Sleeping in our down jackets in 30 degree weather in a hut.

The next day when we left the island, we spent the night in a town called Puno. Everyone is very traditional there- it was interesting to watch a protest go down- we got three different answers on what they were protesting, so not really sure what was happening, but it was cool to see another culture peacefully protesting something they felt strong about.  After an amazing dinner where we met a woman who went to Peru to do research and ended up falling in love with a man there and helping run his restaurant, and a cool recommendation to go to a hidden molecular bar, we went to sleep to catch an early train.

The next day we had a 10 hour train ride to Cusco.  It sounded like a long trip, but it went by so fast.  We sat in comfy seats with a tablecloth, and they had activities throughout- 2 different live bands, dancing, a fashion show, pisco sour making class, and happy hour (2 for 1 drinks!).  I would have to say my favorite part of the ride ended up being standing at the back of the train.  The back of the train was open to the tracks, so as we went through remote cities, we had the opportunity to wave at the people who lived there.  They were all so excited to see us.  This goes back to my post earlier about my friend’s dad who passed- there is something special about making a connection with others- even if it’s just for a few seconds to wave, to acknowledge their existence.

Hanging out in the back of the train that was open to the tracks. 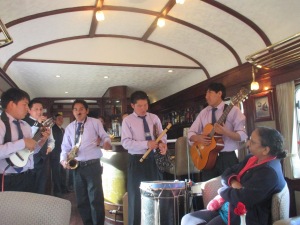 Entertainment on the train.

View from the back of the train as we went through small towns.

We finally made it to Cusco around 7:30pm- had a night on the town, and spent the next day exploring the city.  We shopped, ate, drank, people watched, got $15 massages, walked through amazing local markets, and met some cool people. We ended up meeting an artist named Albert along the way.  He was working in his little shop we stumbled upon.  He was the nicest man- barely spoke any English, but somehow we were able to communicate.  He was telling us about how much energy there is in Cusco because it is near the center of the universe.  Men and women have different energies and he told us how to stand to feel the energy once we go to Machu Picchu the following day.  At one point he lifted up his shirt to show us where men give out energy- there are 4 spots- 2 from their nipples, and two from their lower abdomen.  My friend Erin saw he had 2 nipple-like swirls of hair on the two lower energy spots- I couldn’t look.  Overall, the experience talking to him really showed how passionate these people are, even with a language barrier to talk about their beliefs and the power of where they live.  We bought some of the stuff he made as souvenirs, then he ended up giving us hand-painted shot glasses as a gift and took down our info to find us on facebook.

Picture from a restaurant we went to in Cusco- they were cooking Cuy (Guinea Pig).

Albert’s studio- this is where he makes Alpaca scarves, gloves, etc.

The next day we had a 3.5 hour train ride, then 30 minute bus ride to Machu Picchu.  This was not nearly as luxurious, but there were some cool sites along the way. Amazing how much the terrain changed in this part of Peru. The bus ride might’ve been one of the scariest things I’ve done- buses going in both directions with huge cliffs on one side. I googled afterward how many people die on those buses- no results came back, so I’m sure they keep it hush! Machu Picchu was unreal. It’s hard to put into words how majestic everything felt there.  How unreal that the Incan people found this place so high above the ground to build an amazing city.  They were so smart and thoughtful with how they built the city. The windows on buildings were built so that one would get sun in the winter, and the other in the summer. They had rocks that helped them identify the date based on where the sun hit.  It was spectacular.  We had a guided tour, then had some time to sit and just take it all in.  Besides the gnat bites I got, it was the most amazing experience. In hind-site, I would have spent the night there at the town at the bottom, but instead we took the 3.5 hour train ride back to Cusco before our flight to Mancora in the morning.

View from the top! 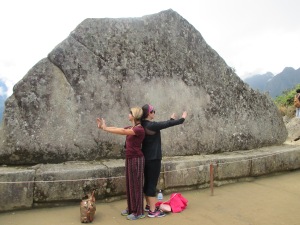 The Sacred Rock- doing what Albert told us to do.

We woke up bright and early the next morning to head to our last destination, Mancora- this is up North by Ecuador- they were supposed to have some nice beaches to relax.  After some travel frustration, we ended up making it there by 4pm that day. The beaches were beautiful and just what we needed after being nonstop for so long. The town ended up exceeding our expectations. I’m pretty sure we were the only Americans there, so we not only got to relax, but got to see what Peruvians do when on vacation at the beach. We had the next day to relax and explore the beach- lots of stuff washed up on the shore, and had the most amazing meals that were so cheap! 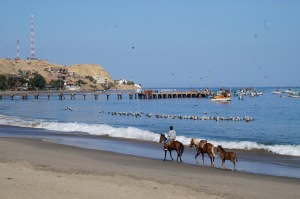 View on the beach.

We had about half the next day to soak up the last of the sun, then headed back to the airport to head home.  It was a quick trip, but we got to experience so much. I’ve always been a little nervous traveling somewhere I don’t know the language, but this trip taught me you can really get by not knowing the language, and there are good people out there to help you along the way.  5 years ago I would have said that I wasn’t into traveling internationally because I didn’t want to deal with a long flight.  Now, my next goal is to take a trip somewhere far by myself.  Suggestions are welcome 🙂

8 thoughts on “Peru- Overview of Trip”